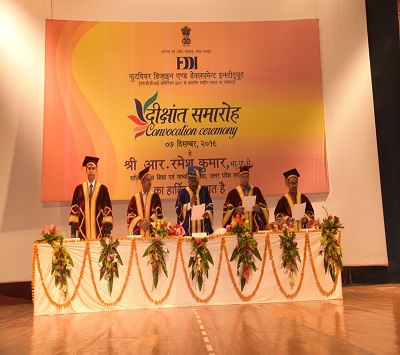 On behalf of FDDI, Mr. Arun Kumar Sinha, IAS, Managing Director, FDDI welcomed the chief guest and all the delegates during both the convocation ceremonies.

The convocation ceremony began with the lighting-up of the ceremonial lamp by the Chief Guest at both the campuses of FDDI in the presence of an audience comprised of the Graduating batch, the entire student & staff body.

The Managing Director of FDDI, Mr. Arun Kumar Sinha, IAS, in his ‘Welcome Address’ during the convocation ceremony at both the campuses of FDDI motivated the students to not to forget their value systems, work ethics and humanity and be exemplary in whatever one choose to do in one’s professional life.

Mr. Sinha also said that since you have now become a part of the large community of alumni of the institute, which bestows some privileges and put some responsibilities on you. Fufill them wisely. 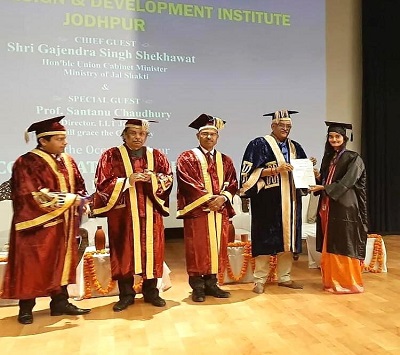 Marking the successful completion of their respective professional programme, a total of 162 students belonging to the batches of 2018 and 2019 were awarded their Degrees during the convocation ceremony at FDDI, Fursatganj campus.

Similarly, a total of 150 students belonging to the batches of 2018 and 2019 were awarded their Degrees at the historic ceremony at FDDI, Jodhpur campus.

The chief guests in their speeches extended their best wishes to all passing-out students for a successful life.

The Valedictorians were called on the stage first at both the campuses, where they received their medals at the hands of the Chief Guest, proof of their undying, ever present effort towards achievement of excellence in their respective programme.

Mr. Vikas Verma, IRSME, Executive Director, FDDI, extended the 'Vote of Thanks' at FDDI, Fursatganj & said I am very grateful to all the esteemed guests for their gracious presence and for encouraging us on this occasion.

Mr. Ashok Kumar Choudhary, IRSS, Executive Director, FDDI extended the 'Vote of Thanks' at FDDI, Jodhpur & said my deepest gratitude to all the esteemed guests for their gracious presence and adding charm to the occasion.