The webinar which was organized by School of Footwear Design and Production provided an insight on 3D printing which is shaping new possibilities in Footwear Engineering, enabling footwear companies to create new shoe designs & address the growing demand for customization.

Mr. Anand Kumar Mishra, a B. Tech. (Mechanical Engineering) has provided over 500+ technical workshops to educators, students and corporate on FDM based 3D printers and Design Thinking to integrate designing and rapid prototyping.

Mr. Anand briefed the participants about how the technology has made a shift in Industry 4.0. 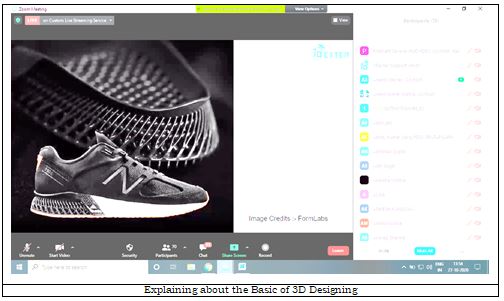 He added that 3D printing has been used for Footwear Prototyping (A process that allows footwear professionals to craft test shoes before making their final products) since last 30 years. But now in recent years, however, additive manufacturing technologies have become productive and cost-effective enough for the mass production of accessible end-use footwear products.

Mr. Anand also discussed about the Basic of 3D Designing, Slicing and its Techniques, Introduction to Design Thinking, 3D Modeling and Printing and Live Demonstration of 3D Printing was made. 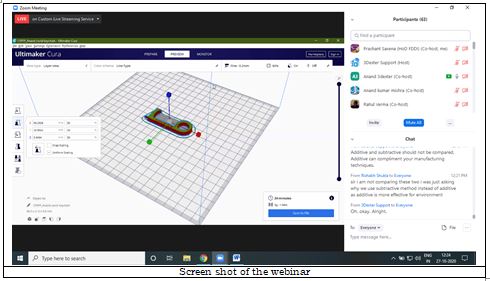 According to a recent report from a research firm, SmarTech Analysis, footwear 3D printing is set to grow into a $6.3 billion revenue opportunity over the next 10 years. The report also indicates that the 3D-printed footwear segment will become largest 3D-printed consumer product segment by 2029.

The purpose of the webinar which was conducted through presentation, interactive session & live demonstration of 3D printing was to make students aware about the Future of 3D printing in Footwear Industry and its challenges in the footwear value chain.

The webinar was attended by more than 100 participants including students & Faculties from Fursatganj campus and 300 participants from all other campuses and industry. It was widely applauded.