On 16th March, 2021, the students of FDDI School of Footwear Design and Production (FSFDP) who were accompanied by their faculty and HoD, visited Decathlon Sports India, which situated at Chhota Anjaiah Nagar, Gachibowli, Hyderabad.

The purpose of the visit was to provide operational exposure to the students about the intricacies of sports footwear design and how to align it with current aetiology so as to minimize the Running-Related Injuries (RRI).

Decathlon is the largest sporting goods retailer in the world, established by Michel Leclercq in 1976. Decathlon began with a store in Lille, France. The company deals with the research, design, creation, logistics and distribution of its products in house; partners with global suppliers; and markets their own brands directly to consumers in Decathlon-branded big-box stores. As of January 2020, Decathlon operated 1,647 Decathlon stores worldwide in almost 1,000 urban communities and 57 nations. 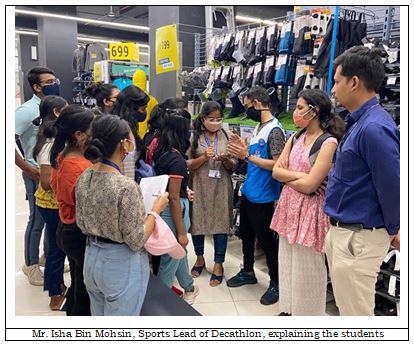 Mr. Isha Bin Mohsin, Sports Lead of Decathlon, explained the students about the psychographic, demographic, behavioral segmentation, the variables and focuses to be circumspect during design a sports shoe and so on. He also briefed about effects of spikes, studs, lugs with various nature of game.

The students were exposed to the most recent innovative improvements in footwear design through the various sports footwear that are available under one roof.

The visit was an eye opener which provided better understand to the students about the ‘logic of athletics and sports-specific footwear’, understand the nature of the game and choice of target customer and the influence of lateral structure of sole, lugs and webbing, etc.